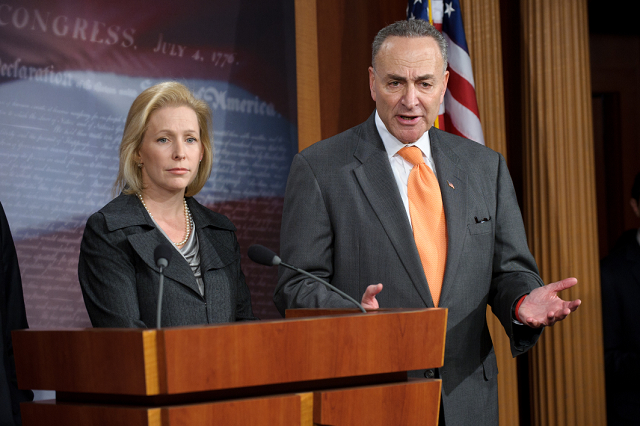 In a letter to FEMA Administrator Craig Fugate, Schumer and Gillibrand said that they are “deeply disturbed” by this information because FEMA had initially said that those who entered the Claims Review Process would receive a resolution of their claim within 90 days.

The senators urged FEMA to dedicate adequate attention, resources and staff to address the delays and rectify “what is clearly an example of the agency overpromising and under-delivering.”

Schumer and Gillibrand have also urged FEMA to provide clear guidance to policyholders who have applied to the program to have their claim reviewed but, according to FEMA, have not yet submitted all necessary information that the agency needs to review their claim. Schumer and Gillibrand noted that FEMA recently said that it will send follow-up letters to policyholders that the agency is still waiting on – and if there is no response, FEMA will close the case within 14 days, a policy that they said was too rigid. For instance, policyholders are often asked to send information on their claim, further documentation and/or the PII release to allow the adjuster to begin reviewing their claim.

Schumer and Gillibrand said that “given the circumstances,” FEMA should be more flexible. In some instances, the pols noted, policyholders may still be gathering documentation and information needed to submit their claim. Therefore, they said they are calling on FEMA to work with policyholders who have signed up for the Claims Review Process, and, prior to closing out any claims, affirmatively confirm that the policyholder no longer seeks to participate in the program.

“We know from brutal experience that the flood insurance program was broken and denied countless Sandy victims timely and just payments on their claims,” Schumer said last Friday. “This is a travesty that FEMA promised to rectify with its Flood Insurance Program Claims Review Process, but the bottom line is that it is failing miserably to promptly and fairly review and pay many thousands of unjustly denied policyholders’ claims. FEMA has reviewed and closed a paltry 5 percent of submitted claims. This is maddening – and not acceptable, which is why I am demanding that FEMA address these issues, eliminate the backlog and work closely with policyholders until not one case is left in the docket.”

Asked about the senators’ missive and the claims of foot dragging contained therein, FEMA spokeswoman Susan Hendrick said, ““FEMA is dead set on getting through these claims as quickly as possible and has taken action to make that happen. We have recently doubled the number of adjusters reviewing claims to speed up the process. The adjusters are now working seven days a week, including day and night shifts.”

Bill Kelly, a Rockaway native and partner at McCarthy & Kelly LLP who is representing several Sandy flood victims against FEMA, said he doesn’t “know how the federal government gets away with this.

“Only a tiny fraction of cases have been reviewed,” Kelly continued. “An even smaller fraction has been settled. Almost none have been paid! We have claims that were settled more than six months ago and FEMA has not paid them. FEMA is set up to do an even worse job on reviewing the reopened claims than they did on the original claims. It’s almost as if FEMA is trying to break the world record for inefficiency and wasting taxpayer dollars. All homeowners everywhere—even those not affected by Sandy—should be outraged at FEMA’s appalling treatment of Sandy victims.”