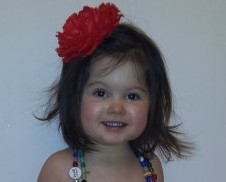 On Thursday, Nov. 12, at 3:35 p.m. Howard Beach will join the Allen family in marking the minute their beloved 2-year-old daughter, Valentina Marie, succumbed to heart disease six months ago in a hospital room in Pennsylvania, by releasing red balloons into the afternoon sky outside their home.

Neighbors and business owners are also encouraged to once again “paint the town red”—affix red balloons or bows to their homes or establishments—just as so many did in May in the days after Valentina passed away in her mother’s arms at Children’s Hospital of Philadelphia.

Since her death, countless highly successful charity events have been organized in Valentina’s name, with more scheduled for later this year and early 2016.

“She put up a battle every single day, and she touched more lives and inspired more people than she will ever know,” her mom, Danielle, said at the time. “All of the prayers helped her to persevere this long, and now she will be a beautiful baby among the angels in heaven, forever watching over us all.”