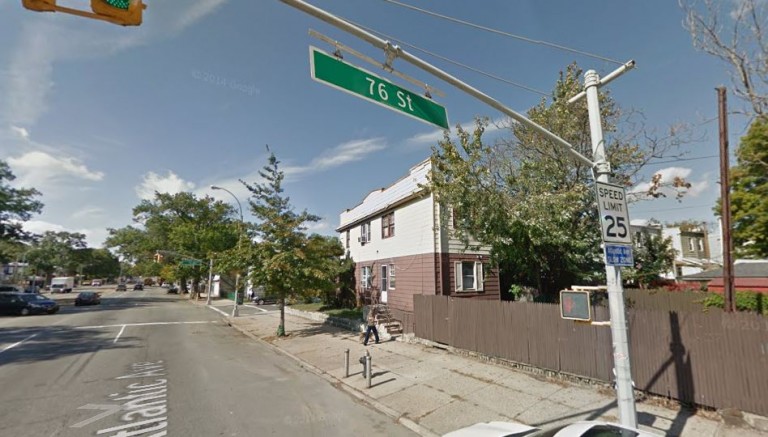 PHOTO:  A Brooklyn mom has been charged with drunk driving after she allegedly slammed her SUV into a Sanitation truck at 76th Street and Atlantic Avenue last Thursday. Her four young children were injured in the incident. Photo Courtesy of Google

A Brooklyn mother has been charged with drunk driving and other offenses after she allegedly slammed her SUV into the back of a city sanitation truck, injuring her four young children, early last Thursday morning in Woodhaven, according to Queens District Attorney Richard Brown.

Rishma Sookdial, 36, was arraigned last Thursday, according to court records, on a criminal complaint charging her with four counts of felony aggravated driving while under the influence and four counts of misdemeanor endangering the welfare of a child.

Sookdial is free after posting $2,500 bail, according to the city Department of Correction. Her next court date is Nov. 30.

According to the complaint, a city Sanitation employee said he saw Sookdial driving a Honda SUV with four children inside when she allegedly crashed the vehicle into the rear corner of the DSNY collection truck.

When police responded to the scene at 76th Street and Atlantic Avenue, the Honda’s front windshield was cracked and there was extensive damage to the front of the vehicle. Sookdial’s 11-year-old son, whose leg was broken in the crash, was trapped inside and had to be extricated from the SUV by firefighters. Sookdial’s 9-year-old son complained of pain in his abdomen, and her 5-year-old son suffered a laceration and bruise above his eye; her 18-month-old daughter’s lip was bleeding. All four children were taken to a nearby hospital for treatment, Brown said.

Sookdial allegedly had bloodshot and watery eyes, and police detected a heavy odor of alcohol on her breath. Her speech was slightly slurred and she swayed back and forth while standing, according to the charges. Sookdial allegedly told cops that she was on her way home after having one drink at a friend’s house. It is alleged that a Breathalyzer test administered at the scene showed a blood alcohol content of .253—which Brown noted is “significantly” above the city’s legal limit of .08.

If convicted, Sookdial faces up to four years in prison.

“My office has zero tolerance when it comes to individuals who get behind the wheel while under the influence of alcohol,” Brown added. “In this case, the defendant didn’t just risk her life while allegedly driving drunk, she also exposed her children to grave danger. Although her four youngsters were injured in the crash, it could have been much worst. The defendant now faces serious charges and jail time if convicted.”

This isn’t Sookdial’s first experience with the criminal justice system. According to court administration, prior to last Thursday’s incident, Sookdial was fighting two other cases – one in Queens and one in Brooklyn. In both cases, she has been charged with violations and misdemeanors.