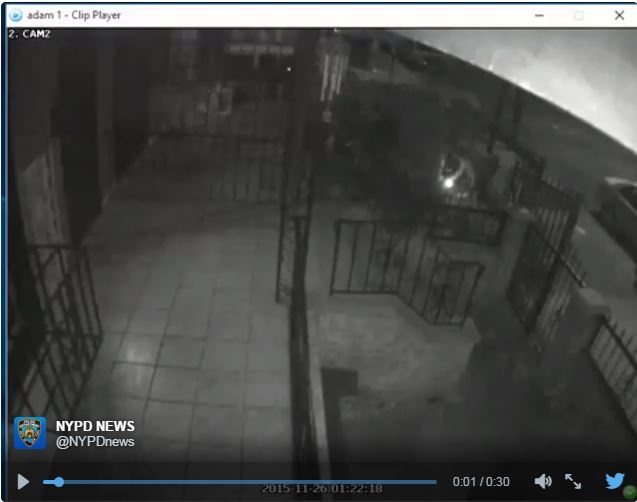 ​PHOTO: Cops have asked for the public’s assistance in identifying a man who set fire to 40 religious Hindu flags on 80th Street in Woodhaven. ​ Photo Courtesy of NYPD

The city Police Department on Monday issued a request for media attention and the public’s help in identifying a man who set fire to dozens of Hindu prayer flags that were displayed in the front yard of a Woodhaven family’s home.

The arson incident, which occurred last Thursday, around 1:15 a.m., on 80th Street near 89th Avenue, is being investigated as a hate crime.

“An unknown suspect entered the victims’ front yard and did ignite a fire to 40 religious Hindu flags before fleeing southbound on 80th Street,” according to investigators, who added that no one was injured in the attack.

The man was seen wearing a three-quarter length jacket and baseball cap, and pulling a medium-size travel bag.

The Woodhaven Residents’ Block Association called it “a shameful incident,” and urged all to “help the police find and question” the perpetrator.

“Clearly this is a disturbing act,” the civic wrote in an email.

“Crimes which target religious expression are hate crimes, and should be treated as such,” said City Councilman Eric Ulrich (R-Ozone Park). “Whoever is responsible for the burning of these flags must be held accountable. We simply cannot tolerate any form of religious persecution.”

State Sen. Joe Addabbo, Jr. (D-Howard Beach) said, “The burning of these Hindu flags near someone’s home is an unacceptable act of hatred that our community will not tolerate. Queens is one of the most diverse places in the world, and we as a borough should be extremely proud of that. My support is with the family whose culture and beliefs were targeted by this inexplicable crime and I thank the NYPD for not only naming this a hate crime, but for working diligently to ensure those responsible for this act are brought to justice.”

Anyone with information regarding this incident is asked to call Crime Stoppers at (800)577-TIPS (8477).  The public can also submit their tips by logging onto NYPDCrimestoppers.com, or by texting their tips to 274637 (CRIMES), then enter TIP577.