“Why are there still pet stores?” Joann, a Howard Beach resident, innocently asked her sister-in-law, who had been doing research on the subject.

And it’s a difficult question to answer, particularly for anyone that has visited animal shelters and seen the myriad animals, many purebreds, picked off the streets and out of the hands of owners who simply no longer want them. 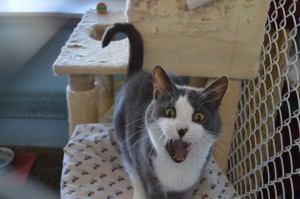 This formerly feral cat, who lives on the “Catio” at Bobbi and the Strays, along with fun-loving Diesel — and hundreds of animals like them — are available for adoption and fostering every day from rescue operations throughout Queens. Forum Photos by Eugénie Bisulco

“I wish breeders realized that they shouldn’t breed animals anymore,” said Andrea, the manager of Bobbi and the Strays’ Atlas Shops locations. She explained that the no-kill shelter has frequently taken in animals whose owners purchased them before understanding the workload and cost involved. Like buying junk food when you’re hungry, the regret comes after the initial delight wears off. “Don’t get a dog if you can’t afford to have one,” she emphasized.

In addition, as Andrea was quick to point out, many pet owners aren’t educated enough about the importance of spaying and neutering — and when they do know and care enough to get their pets sterilized, the cost can be overwhelming. Some veterinarians charge as much as $700 for the procedure.

But lower cost options do exist. As one example, ASPCA’s mobile clinic (aspca.org/nyc/aspca-mobile-spayneuter-clinic), available at various Queens locations three or four days a week on average, charges as little as $5 and as much as $125, depending on income level. Shelters, rescue and foster operations, and Animal Care Centers of NYC are legally bound to spay and neuter before releasing animals. Though they don’t sterilize animals outside of those up for adoption, ACC’s website at nycacc.org does suggest several low-cost options in addition to the ASPCA; of note is The Toby Project, which offers free spaying/neutering for pit bulls and non-purebreds regardless of household income.

Getting an animal “fixed,” actually does more fixing than one might think. Several cancers and infections can be prevented as a result, extending the life of the pet by years. Sterilization also regulates hormones in animals, which in turn helps to modify behaviors detrimental both to pet owners and to animals themselves. In addition, being already spayed or neutered when admitted to an animal control center may save them from near-immediate euthanasia. Thus, in addition to reducing the tremendous overpopulation problem, sterilization will ultimately give you more time – and better-quality time – with your pet. Only 10 percent of admitted shelter animals have been spayed or neutered. And nearly three million animals in shelters nationwide are euthanized every year.

Local rescue operations like Fur Babies and Bobbi and the Strays do their part to educate the public on the importance of spaying and neutering. The Mayor’s Alliance for NYC’s Animals, a non-profit organization not affiliated with the Mayor or funded by the city, collaborates with over 150 community partners in an effort to make New York City a “no-kill community.” To that end, their website (animalalliancenyc.org) also includes many resources for affordable pet care.

“In 12 short years we have dramatically reduced the number of animals killed in shelters each year, while at the same time increasing adoptions and community-wide spay/neuter.  But our work is far from over,” said Jane Hoffman, President of the Alliance.  “Every pet owner and would-be pet owner in New York City has the power to help us as we continue to reduce the number of homeless animals living in shelters and on the streets in the five boroughs.  The first step is to adopt from a shelter or rescue group. Buying from a pet store or breeder should never be an option when there are thousands of homeless pets just waiting for a loving forever home.  Equally important is for pet owners to ensure that their animals are spayed or neutered.  Reducing the number of unwanted litters keeps the shelter population down and keeps unwanted animals – particularly cats—off the streets.  Of course, spaying or neutering brings added health benefits that will allow pets to live healthier and longer lives.”

To be an animal ally (and save a life), numerous adoption and foster options exist. Here in south Queens, see websites and Facebook pages for Bobbi and the Strays, the NYC Animal Care and Control Centers, Heavenly Angels, Pets on Death Row, and Fur Babies Rescue (Adopt! Don’t Shop!) – or give The Forum a call, and we’ll try to help. To get a pet spayed or neutered, visit aspca.org, email info@tobyproject.org, or visit your local friendly veterinarian.