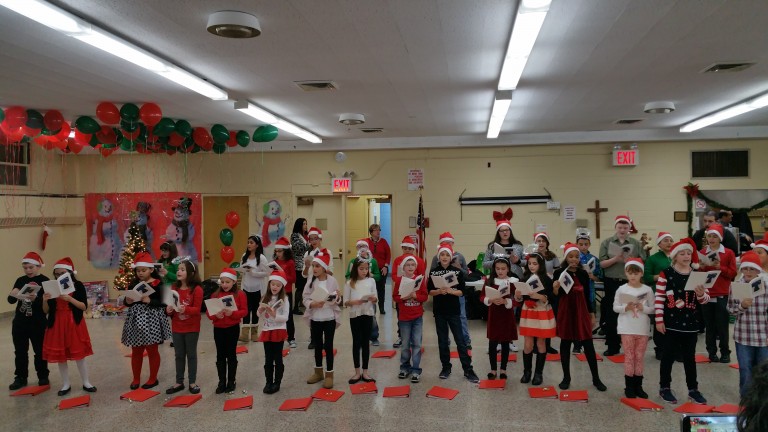 The Ave Maria Catholic Academy Children’s Choir was one of three talented youth groups that captivated the audience on Tuesday at the Howard Beach-Lindenwood Civic Holiday Gathering.

The Howard Beach-Lindenwood Civic on Tuesday waved goodbye to a productive 2015 with its annual Holiday Gathering at St. Helen Catholic Academy—where the kids stole the show.

The Stanford Dance Studio and the children’s choirs of St. Helen and Ave Maria Catholic Academy strutted and sang for the season, eliciting cheers and participation from the more than 100 audience members in attendance.

There was a palpable buzz inside the cafeteria at St. Helen’s as the Stanford troupe marched in two lines up to the front of the room. Clad in matching red T-shirts, the girls brought the house down with choreography set to a holiday-tinged medley of Dem Franchize Boyz’s hit “Lean Wit it, Rock Wit It.”

The choirs led beautiful renditions of Christmas classics, including “Soon and Very Soon,” “Frosty the Snowman,” and crowd-favorite “Jingle Bells.”

But it was their spirited presentation of “Santa Claus is Coming to Town” that spurred the surprise appearance of the titular holiday hero, who posed for pictures and thanked families for contributing to the 106th Precinct Toy Drive.