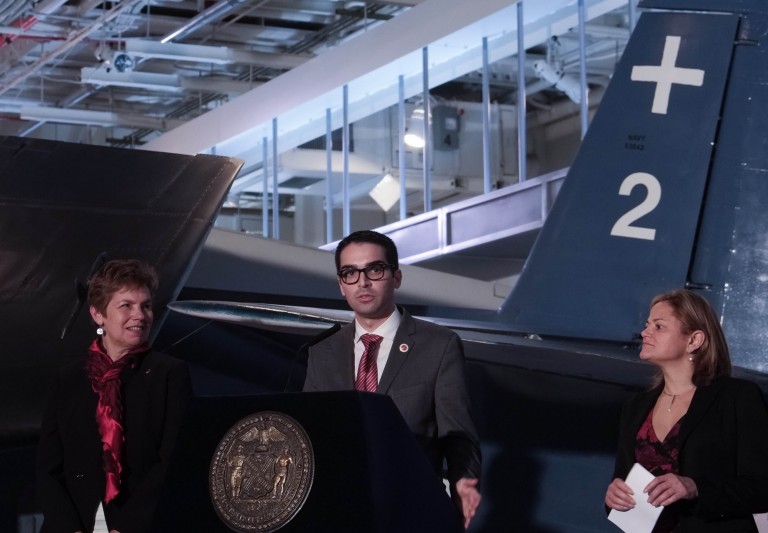 Against the fitting backdrop of the Intrepid Sea, Air and Space Museum last Friday, Mayor Bill de Blasio signed into law a bill that establishes the city Department of Veterans’ Services.

Int. 314-2014, introduced and sponsored by City Councilman Eric Ulrich (R-Ozone Park), became Local Law 113/2015 once de Blasio added his signature, according to Ulrich’s office. Last Friday’s historic moment capped a two-year effort led by Ulrich, chairman of the Council Committee on Veterans and older brother to a U.S. Marine, to strengthen veteran services and resources in the five boroughs, including working with Council leadership and the administration to help quadruple funding and staff in support of the now-defunct Mayor’s Office of Veterans’ Affairs.

By elevating MOVA, Ulrich said, the city will be in a better position to address the needs of the 225,000 veterans that call the Big Apple home, including homelessness, employment opportunities, and mental health services.

“Veterans are such an important part of the fabric of our great city,” Ulrich said. “By elevating the Mayor’s Office of Veterans Affairs to the department level, the City of New York will lead the nation in honoring the military service and selfless sacrifice of our large and diverse veterans’ community. With the stroke of his pen, Mayor de Blasio will establish the Department of Veterans Services which will improve our ability to help and empower veterans throughout the five boroughs. I want to thank Speaker Melissa Mark-Viverito and all my colleagues in the Council who co-sponsored this bill and championed its passage. I also want to thank Mayor de Blasio and Commissioner [Loree] Sutton for their support and friendship. This historic day would not be possible without the help and guidance of our veterans advocates who work tirelessly on behalf of this cause. Together, we will usher in a new era for veterans’ services in New York.”

The new Department of Veterans’ Services will be a one-stop shop for veterans in the city and connect military families with benefits and programs designed to help veterans transition back to civilian life, Ulrich noted. The department will work with federal, state, and local agencies and to inform and assist members of the armed forces, veterans and their families.

“The brave men and women who selflessly served our nation deserve access to all the services and support they need to return to civilian life. Every veteran in New York City should know where they can access vital services, and this department will help make this goal a reality,” de Blasio added. “Commissioner Sutton has been a strong leader for the Mayor’s Office of Veterans’ Services, and I look forward to working with her as we build up this city’s Department of Veterans’ Affairs. I want to thank City Council Speaker Melissa Mark-Viverito, Council Member Eric Ulrich, the entire City Council, and the tireless veterans’ advocate community for their support in pushing forward this department for our city’s brave veterans.”