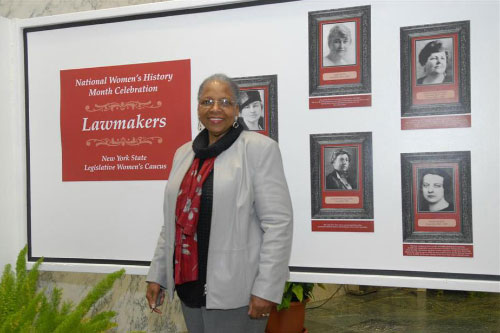 Barbara Clark, a borough assemblywoman who represented the 33rd District in Albany for nearly 30 years, died on Monday night on Long Island. She was 76.

The cause of death was not made public.

Clark, a Democrat and native of West Virginia, was first elected to the lower chamber in 1986, serving the eastern Queens communities of Bellerose, Cambria Heights, Hollis, Queens Village, St. Albans, and part of Floral Park. The deputy majority whip, Clark also was a member of the committees on Children and Families, Education, Health, Labor, Libraries and Education Technology, and Rules; and the Black, Puerto Rican, Hispanic & Asian Legislative, and Women’s caucuses.

Clark was most passionate about education, specifically equity in funding and access to quality educational programs for all New York students. According to her office, she was instrumental in converting Andrew Jackson High School, which originally housed approximately 3,500 students, into four small magnet high schools.

Clark also was a primary sponsor of the 1996 New York City Governance Law, which mandated parental involvement in school policy decision-making. And she authored legislation to establish the age of 6 as the statutory age for full-time attendance in school.

Clark’s colleagues and contemporaries praised her for three decades of public service.

“These gray skies have created a very somber background for us in Southeast Queens today, as we remember the life and gift of our Assembly Woman Barbara M. Clark, who passed away last night,” City Councilman I. Daneek Miller (D-St. Albans) remarked on Tuesday. “For over a quarter century, she served in the Assembly as a staunch advocate for equity in funding for health and education, and as a fighter for the communities she represented with dedication and compassion. I consider Assemblywoman Clark my mentor, my colleague, and my friend, and I am absolutely devastated to learn of her transition. I ask that everyone keep her family in your thoughts and prayers during this difficult time.”

City Mayor Bill de Blasio said, “Today we mourn the loss of Assembly Member Barbara Clark, who served as Deputy Majority Whip and Chair for the Education Committee of the NYS Black, Puerto Rican, Hispanic and Asian Legislative Caucus. As an Assembly Member, she put students and education first by fighting to properly fund New York State’s public schools and ensuring that all students had access to quality education – values that we uphold in our city and that are vital for our youth and communities as a whole. We have lost a great lawmaker in New York State, and I offer condolences to Assembly Member Clark’s family on behalf of my administration, her fellow Queens residents and all New Yorkers.”