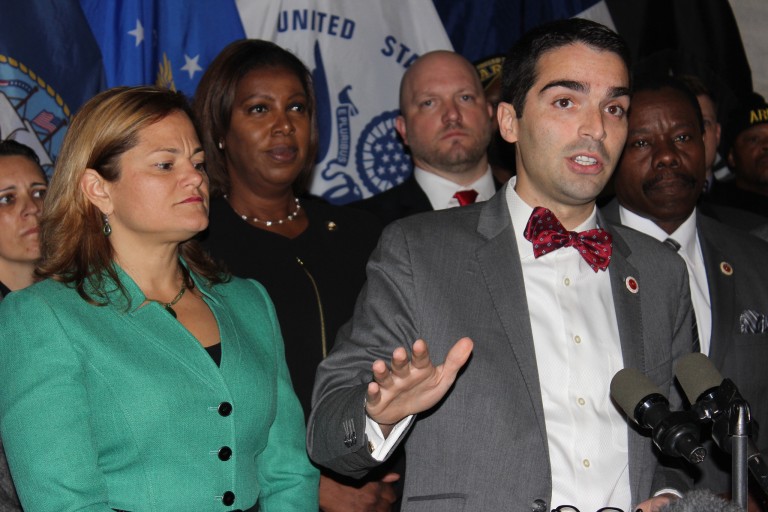 PHOTO: City Councilman Ulrich has filed paperwork with the city Board of Elections to create an exploratory committee – and inch closer toward announcing that he’s ready to take on Mayor de Blasio in 2017. Courtesy of Iraq and Afghanistan Veterans of America

Does City Councilman Eric Ulrich (R-Ozone Park) want to be the 110th mayor of New York City? The latest trail of – unofficial, off-the-record – bread crumbs seems to lead in that direction; whether that route terminates at Gracie Mansion remains to be seen.

However, what is thoroughly evident and utterly undeniable is the erstwhile GOP wunderkind’s disapproval of the policies of that Yorkville residence’s current tenant.

In that same exclusive report, the News revealed that the Ozone Park native has filed paperwork with the City Board of Elections to set up “Ulrich 2017,” an unspecified exploratory committee, though it is widely believed to be the first step of a marathon mayoral run to oust Democrat de Blasio in the fall of 2017.

“Eric Ulrich has all the qualifications needed to be a great Mayor for New York City,” said Republican State Committeewoman Joann Ariola. “He continues to have a successful career as a public servant for the 32nd Council District, as well as serving in a citywide capacity as chair of the Veterans Committee.  Additionally, Eric is a strong advocate for education, small business, civil rights, public safety, quality of life in our communities, and making sure that the constituents he serves receive the services promised to them by the City of New York.”

This isn’t the first time Ulrich’s name has been raised as a possible challenger to the incumbent. In February, published reports had Ulrich being courted by state GOP Chairman Ed Cox, Queens Republican Party Chairman Bob Turner, and Joe Lhota, who ran unsuccessfully against de Blasio in the 2013 race to succeed three-term Mayor Michael Bloomberg.

“Like so many New Yorkers, Councilman Ulrich is concerned about the future of our city,” an Ulrich spokesman said at the time. “While he appreciates the encouragement of friends and supporters alike, he is not a declared candidate for Mayor at this time. His primary focus remains serving the needs of his constituents and fighting for New York City’s large and diverse Veterans community.”