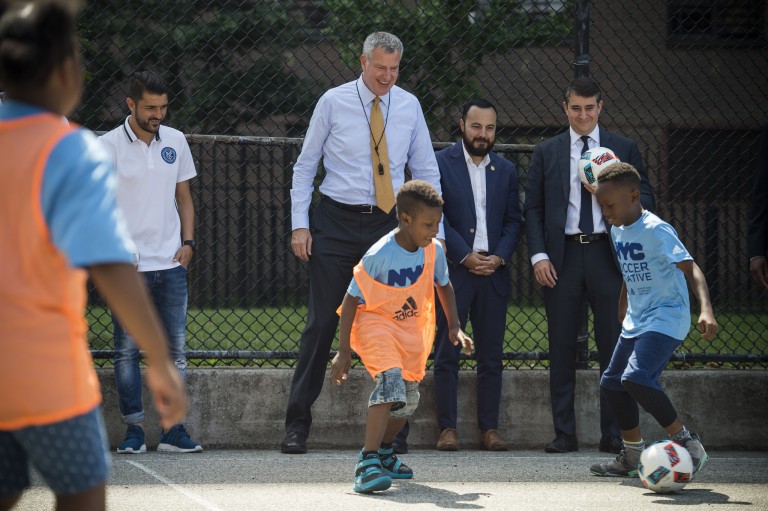 PHOTO: Two of the first eight fields will be installed at sites in Jamaica and Glen Oaks. Courtesy of Ed Reed/Mayoral Photography Office

Fifty new soccer fields will be installed in underserved neighborhoods across the five boroughs over the next five years, thanks to the New York City Soccer Initiative – a public-private partnership that will invest millions of dollars in the pitches and after-school programming for 10,000 students, Mayor Bill de Blasio announced on Tuesday.

The four partners of the Initiative – the Mayor’s Fund to Advance NYC, the U.S. Soccer Foundation, New York City Football Club and adidas – have pledged to invest a total of $3 million to build and maintain the fields and provide free programming for City school children focused on healthy, active living and mentorship.

The program will provide after-school soccer and mentoring programs, such as soccer clinics, festivals and youth summits to promote safe, active and connected communities, de Blasio said. The Soccer Initiative will also include a partnership with the City’s Young Men’s Initiative, providing young men of color with mentorship opportunities.

Through the construction of the new fields, the NYCSI will aim to connect more young people to soccer, expand the U.S. Soccer Foundation’s soccer after-school program – Soccer for Success ­– and repurpose underutilized spaces in the City’s most underserved neighborhoods.

All of the communities being selected to host the New York City Soccer Initiative fields are focuses of the Mayor’s Building Healthy Communities Initiative, the Parks Department’s Community Parks Initiative, or the Young Men’s Initiative.

“These new soccer fields will be essential in keeping our young New Yorkers safe, active and connected with the community. With this partnership, we are tackling inequalities in all its forms – including in our parks and outdoor spaces,” de Blasio said. “In the city of immigrants, with so many different languages and cultures, the New York City Soccer Initiative will be one of the great tools we use to unify young New Yorkers. My thanks to the Mayor’s Fund, the U.S. Soccer Foundation, New York City Football Club and adidas for coming together and building a meaningful program.”

Initiative fields will be constructed to ensure year-round functionality, the mayor added. And NYCFC has pledged to create a fund to support the ongoing maintenance of the pitches. The first eight sites are:

“Growing up in Queens, some of my earliest memories are of learning to play football in Flushing Meadows Corona Park,” said Assemblyman Francisco Moya (D-Jackson Heights). “The announcement today of the New York City Soccer Initiative to build new football facilities in underserved communities will give more children in our great city a chance to play the beautiful game. With the growth of football’s popularity, as well as the South American population, these pitches will provide greatly needed relief to our current facilities that overwhelmed with use. I applaud the Mayor, the New York City Football Club, adidas, and the U.S. Soccer Federation for partnering up to provide the kids in communities like mine the chance to make memories that will last a lifetime.”