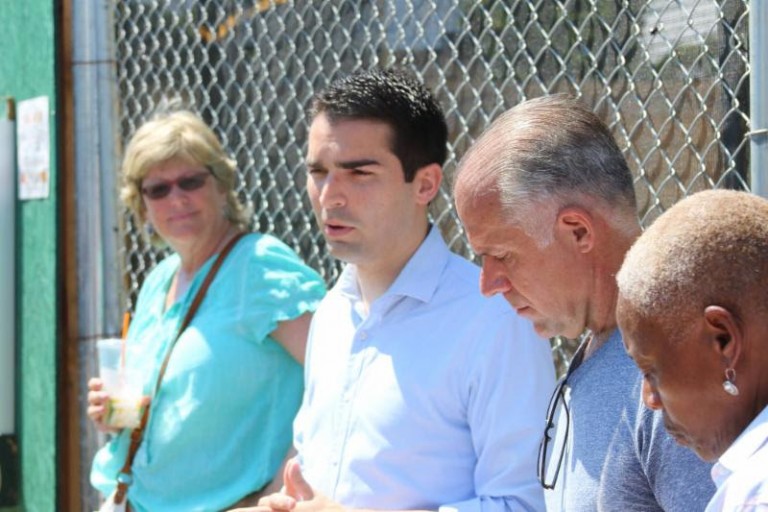 City Councilman Eric Ulrich (R-Ozone Park) came out swinging this week, fast and furiously – blasting the mayor for his “poor handling” of a Superstorm Sandy reconstruction program, then demanding the immediate resignation or termination of Hizzoner’s top storm recovery official.

The political pugilism started on Monday morning on Beach 117th Street in Rockaway Park, where Ulrich ripped Mayor Bill de Blasio at a press conference, saying the mayor “refuses to take responsibility for the failure of Build it Back. There is a total lack of accountability and compassion.”

Ulrich lambasted Build it Back and the current administration “for not delivering on their promise to help people get back into their homes after Superstorm Sandy.”

To illustrate his point, Ulrich held the event in front of the unfinished home of the Nichtern family, Ellen and her mom. The Nichterns have been out of their home for the past five months, during which time Build it Back has not done any work on the residence, Ulrich said, nor has Build it Back remained in contact with Ellen to let her know the status of the project.

Ulrich called Build it Back’s treatment of Nichtern “and the many people in the same situation entirely unacceptable.

“Like so many of my constituents affected by Superstorm Sandy, Ellen Nichtern has been let down by the bureaucrats at Build it Back,” the councilman continued. “This program is a complete disaster. Everyone knows it.”

Ulrich, who is openly flirting with a campaign to unseat de Blasio next fall, also said that Build it Back Director “Amy Peterson should resign today and allow new leadership to run the program more effectively. If she won’t resign, Mayor de Blasio should fire her.”

“When Mayor de Blasio took office and appointed Amy Peterson to run the program, not one homeowner had received a check or seen construction. That is why this administration immediately overhauled the program and took over direct management – resulting in 80 percent of homeowners served to date. Further, $120 million in reimbursement checks have been issued to residents,” said Raul Contreras, spokesman for the Mayor’s Office. “We are continuing to elevate and rebuild homes across the city to complete the program – as the Mayor committed – by the end of this year.”

And on Monday afternoon, Councilman Mark Treyger (D-Brooklyn) said that “Build it Back may face challenges, but Amy Peterson is not one of them. She deserves much credit for improvement of [the] program post-Bloomberg.”