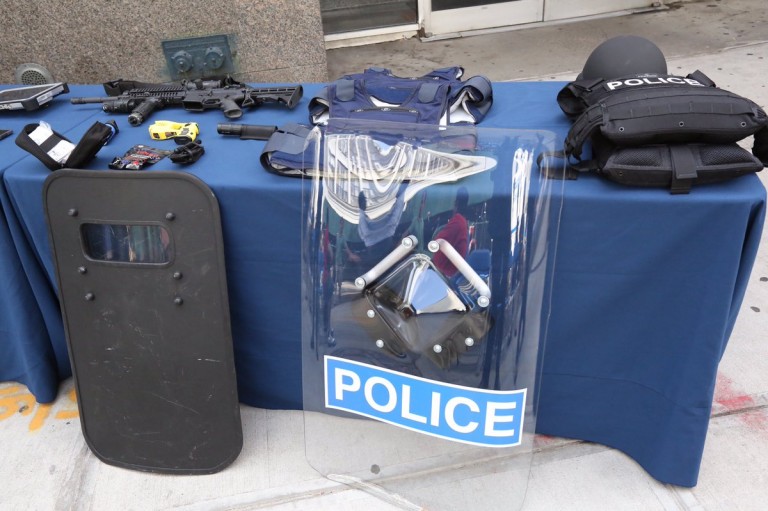 PHOTO: The department has initiated a $7.5 million project to purchase personal protective equipment, including heavy ballistic vests and helmets, to further enhance the safety of responding officers. Courtesy of NYPD

The latest signs of our extreme times were exhibited on Monday on the tables covered in blue cloth that were set up a handful of steps from the front doors of the 84th Precinct in Brooklyn Heights.

Now, perhaps more than ever, the safety of those sworn to ensure ours is at the forefront. The NYPD this week announced that it has begun a $7.5 million project to purchase personal protective equipment, including those heavy duty vests and helmets, to further enhance the safety of responding officers in the event of an active shooter situation. Twenty thousand ballistic helmets will be distributed to all uniformed members of the service assigned to patrol functions. Additionally, 6,000 heavy ballistic vests will be furnished in 3,000 vehicles assigned to patrol duties (two per vehicle.)

Delivery of the equipment will begin at the end of the summer and continue through January, until all vests and helmets have been distributed.

“We are committed to protecting the safety of the public in the city, to ensuring the safety of our officers to the best of their ability – understanding that they must always go in harm’s way no matter what the incident; and to the best of our ability as they go in harm’s way to equip them with the training, leadership, and the equipment necessary to protect their lives so they can protect the lives of New York residents,” said Police Commissioner Bill Bratton.

Bratton noted that officer safety has been a top priority of the de Blasio administration since he took office. Since 2014, more than $320 million has been allocated to fund equipment and training, including: the aforementioned ballistic vests, helmets, and vehicles; tactical escape hoods; oleoresin capsicum (OC or “pepper”) spray, and Tasers; smartphones and tablets; in addition to training initiatives at facilities like the billion-dollar Police Academy in College Point to complement the equipment and prepare officers for the field. Much of the funding, Bratton said, has been provided by City Hall, the City Council, and the Manhattan District Attorney’s Office, among others.

“Obviously, all over the country people have been deeply troubled by the attacks on our officers. I always say: An attack on our police officers is an attack on all of us,” said Mayor Bill de Blasio. “And we have to make sure we’re taking every measure available to protect our officers with the latest gear, the latest technology, given the horrible scourge of guns in this country, and how we’ve seen these guns turned against law enforcement.”

Chief of Department Jim O’Neill added, “I’ve been a cop for nearly 34 years now. The commissioner has been a cop for over 40 years. We know law enforcement is a great job, it’s a fantastic job – but it can also be a dangerous job. But we continue to be committed to making sure we keep all of our members as safe as possible. It’s absolutely a critical priority.”