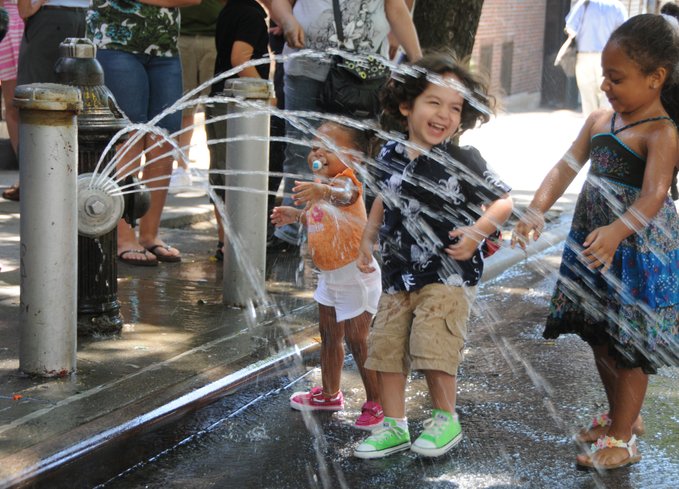 PHOTO: Summer in the City: These kids have the right idea for a quick cool-down. Hydrant spray caps can be obtained at any city firehouse. Courtesy of DEP

For the last week or so, Queens, like the rest of the Burned Apple, has been trying to keep cool – a gargantuan task in the face of seemingly unending, oppressive heat and humidity punctuated by abrupt bursts of thunder and lightning and rain.

Among Gotham’s tried and true – and cheap – ways to quickly cool down is the fire hydrant. But you’ve got to do it right these days.

Opening fire hydrants without spray caps is illegal, wasteful, and dangerous, according to the City Department of Environmental protection. “Illegally opened hydrants can lower water pressure and put lives at risk if there is a fire. Children can also be at serious risk, because the powerful force of an open hydrant without a spray cap can knock a child down, causing an injury,” the agency noted in a safety alert issued on Sunday.

DEP also pointed out that hydrants can be opened legally if equipped with a City-approved spray cap. One illegally opened hydrant can release more than 1,000 gallons of water per minute, while a hydrant with a spray cap releases 20 to 25 gallons per minute. Spray caps can be obtained by an adult, 18 or over, free of charge, at any City firehouse.