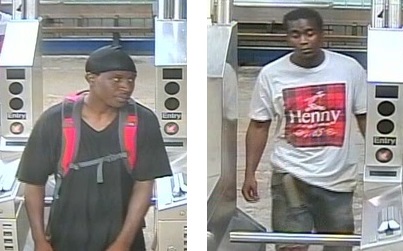 Police have asked the public for help in identifying two suspects wanted in connection with a violent robbery in an Edgemere subway station.

On Saturday, Aug. 20, around 2:30 a.m., the two perpetrators approached a 33-year-old man who was sleeping on a bench on the Manhattan-bound A train platform at Beach 44th Street and began punching him and removed his wallet. Upon discovering that the victim’s wallet was empty, cops said, one of the suspects produced a small knife and demanded cash. The other suspect then removed $200 from the man’s pants pocket.

The victim suffered a bloody nose, bruising and swelling to his face as a result of being punched several times. He was rushed to St. John’s Episcopal Hospital, were he was treated and later released.

The Crime Stoppers Program, which was initiated in 1983, offers rewards up to $2,000 for anonymous information that leads to the arrest and indictment of a violent felon. According to the latest available statistics, more than $1.8 million has been awarded to tipsters, and nearly 1,500 murders and attempted murders, and 1,925 robberies have been solved as a result.