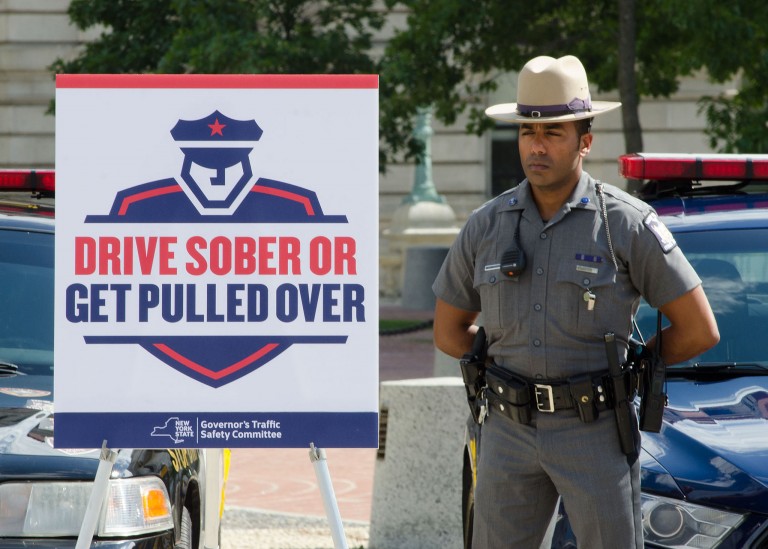 New York State and local law-enforcement agencies’ concerted crackdown on drunk and impaired driving will continue through the upcoming holiday weekend, according to Gov. Andrew Cuomo.

Considered the unofficial end of summer, Labor Day weekend is also one of the deadliest times of year for drunk and drugged driving fatalities. Last year, 41 Empire State counties participated in the Drive Sober or Get Pulled Over Labor Day crackdown, resulting in 237 driving while intoxicated/driving while ability impaired arrests; 17 Drug Recognition Expert Evaluations; 26 DWAI-drug only arrests; 317 other arrests; and more than 3,400 vehicle and traffic law summonses.

This year’s Drive Sober… campaign, which began statewide on Aug. 18 and ends Sept. 5, aims to reduce deaths and injuries caused by motorists driving drunk or impaired by drugs.

“Drunk drivers are a danger to themselves and others, and law enforcement is committed to ensuring the safety of everyone on the road,” Cuomo said. “Impaired driving is a reckless and dangerous crime with potentially fatal consequences, and I urge New Yorkers to drive responsibly to avoid senseless tragedies.”

Impaired driving, according to Cuomo’s office, is a major contributor to crash fatalities. One-third of all traffic crash fatalities in the United States involve drunk drivers. In New York, alcohol involvement was listed as a contributing factor in more than 7,000 police-reported crashes in 2015, while illegal drugs contributed to more than 800 crashes. Additionally, impaired-driving crashes cost the United States $44 billion each year. The penalties for impaired driving are accordingly strict. Drivers convicted of DWI or DWAI three or more times in 15 years face a Class D felony charge, up to seven years in prison, and a fine up to $10,000.

In New York, impaired driving enforcement campaigns are funded by the Governor’s Traffic Safety Committee and STOP-DWI, a self-sustaining highway safety program that allows participating counties to qualify for the return of all fines collected within their county for alcohol and other drug-related traffic offenses. The GTSC backs statewide enforcement and education in conjunction with national crackdowns, and uses federal funds to support impaired driving projects, in addition to supplementing the resources available for statewide enforcement efforts, according to the administration. These include statewide public information campaigns, training programs, multi-agency advisory groups, research studies and projects to enhance state agency programs.

“Every year there are needless tragedies and a wake of victims left behind because of the decisions made by impaired drivers,” said State Police Superintendent George Beach II. “Through education and enforcement, the New York State Police work to keep these drivers off the road. Through campaigns like Drive Sober or Get Pulled Over, we remind people of the dangers of drinking and driving. Together, we can keep New York State’s roads among the safest in the nation.”

The administration also pointed out that drunk driving is often a symptom of a larger problem: alcohol misuse and abuse. Cuomo said New Yorkers can find help for addiction by calling the state’s toll-free, 24-hour, 7-day-a-week HOPEline at 1-877-8-HOPENY (1-877-846-7369) or by texting HOPENY (467369). Addiction treatment providers can be located on the State Office of Alcoholism and Substance Abuse Services Access Help website or on the Treatment Availability Dashboard.