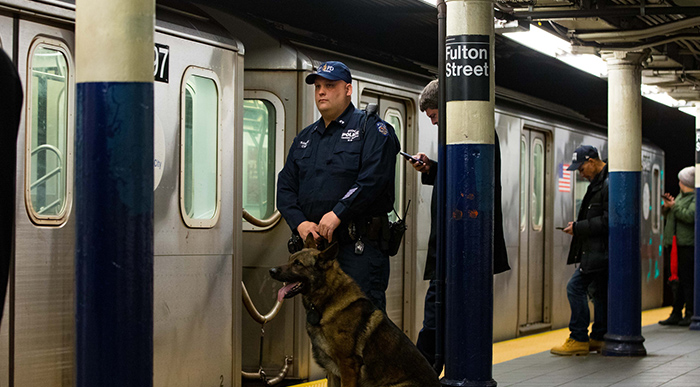 The NYPD Transit Bureau launched the pilot program for Neighborhood Policing a few weeks ago in two of its 12 districts: Transit District 12, which covers the eastern section of the Bronx, and TD 30 in Downtown Brooklyn.

By Michael V. Cusenza
The successful Neighborhood Policing program is coming to the city subway system, Police officials and Mayor Bill de Blasio announced on Friday.
The NYPD Transit Bureau actually launched the pilot program for Neighborhood Policing a few weeks ago a Transit Division in the Bronx and another in Brooklyn.
“It’s all about hardworking New Yorkers who need to know they are safe in the subway and need to know that they can work with the police for the good of all and that’s what Neighborhood Policing is all about; but until now Neighborhood Policing was an idea that was over-ground, now we are going to deepen the concept and bring it underground,” de Blasio said. “Neighborhood Policing works incredibly well in our streets, it’s going to work really great on our subway cars as well and on our platforms. It’s going to change the lives of people all over the city.”
Launched in 2015, the Neighborhood Policing program was designed to greatly increase cop-community connectivity while actually improving the NYPD’s crime-fighting capabilities. It is now up and running in 63 of 76 precincts and every Police Service Area. According to the NYPD, the remaining 13 precincts are on track to feature Neighborhood Policing by October.
According to Police Commissioner Jim O’Neill, who crafted the initiative along with recently retired Chief Carlos Gomez, the precinct-level plan divides commands into four or five fully staffed sectors that correspond, as much as possible, to the boundaries of actual existing neighborhoods. Sector officers assigned to these sectors work the same neighborhoods on the same shifts, increasing their familiarity with the local residents and local problems. The radio dispatchers, supervisors, and sector officers work together to maintain “sector integrity,” meaning that the sector officers and sector cars do not leave the boundaries of their assigned sectors, except in genuine emergencies.
Supporting the sector cops are two officers designated as the Neighborhood Coordination Officers – liaisons between the police and the community, but also crime-fighters and problem solvers in the sector. The NCOs immerse themselves in the community by attending meetings with community leaders and clergy, organizing the sector’s own “Build the Block” confabs, visiting schools, following up on previous incidents, and using creative techniques and adaptive skills to fight crime unique to their particular sectors.
The plan, O’Neill said, seeks to foster a sense of ownership among sector officers for the people, the problems, and even the perpetrators in a particular sector; a sense of geographic responsibility and accountability.
The transit initiative, according to the department, looks much like it does above-ground, with a few modifications. Subway ads will show pictures of the Neighborhood Coordination Officers for that section of train line, so that riders will be able to recognize the officers.
However, unlike the Build the Block meetings that sector officers in precincts have with residents, Transit cops will have to find other ways to connect with busy commuters passing through their stations. Social media and email, therefore, will also play a large role in connecting NCOs and sector officers on the rails with the public they protect, NYPD officials noted.