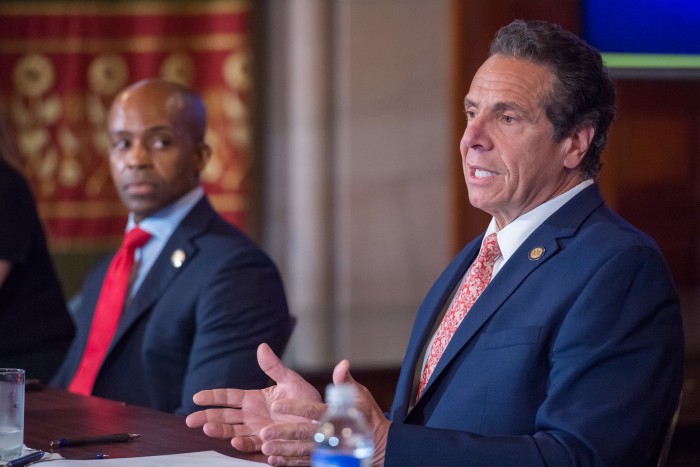 “You are going to have to go back and study the history books to come up with a session that did more good than this session did,” Gov. Cuomo declared on Friday.

Ever since the 2019 Legislative Session wrapped up last week, Gov. Andrew Cuomo and the Democrat-led Legislature have seemingly been on a victory lap, touting “historic progressive accomplishments” notched during what Cuomo has called the most productive Albany legislative confab “in modern political history.”
Even Mayor Bill de Blasio was effusive in his praise of the Executive and the Legislature.
“We haven’t seen a session this daring, productive, and progressive in decades,” Hizzoner gushed Friday.
Hyperbole aside, said “accomplishments” included:
• Passed the Jose R. Peralta DREAM Act, giving undocumented New York students the same advantages afforded to their citizen peers, including access to the Tuition Assistance Program and State-administered scholarships.
• Passed the Climate Leadership and Community Protection Act, creating what Cuomo has characterized as “the most aggressive climate change program in the nation” with goals to: reach zero carbon emissions in the electricity sector by 2040; and directs State entities to work toward a goal of investing 40 percent of clean energy and energy efficiency resources to benefit disadvantaged communities. Additionally, the law creates the Climate Action Council comprised of the leaders of various state agencies and authorities as well as legislative appointments to develop a plan outlining how the State will achieve an 85 percent reduction in greenhouse gas emissions from 1990 levels by 2050, and eventually net zero emissions in all sectors of the economy.
• Made permanent the 2 percent property tax cap, building upon the approximate $25 billion in taxpayer savings since it was implemented in 2012.
• Funded the Metropolitan Transportation Authority with an estimated $25 billion raised through a promised congestion pricing plan, a new progressive mansion tax, and the elimination of the internet tax advantage.
• Enacted legislation in support of LGBTQ rights, including the elimination of the gay and trans panic defense—closing a loophole in State law that allowed individuals to use the gay and trans panic defenses after attacking another based upon that victim’s gender, gender identity, or sexual orientation. The governor also signed into law the Gender Expression Non-Discrimination Act and a ban on LGBTQ conversion therapy.
• Enacted additional sexual harassment protections via a package of reforms that will lower the high bar set for employees to hold employers accountable under the New York Human Rights Law for sexual harassment by amending the requirement that conduct be “severe or pervasive” to constitute actionable conduct; extend the statute of limitations for employment sexual harassment claims filed with the Division of Human Rights from one year to three years; and protect employees’ rights to pursue complaints by mandating that all non-disclosure agreements in employment contracts include language stating that employees may still participate in government investigations conducted by local, state, and federal anti-discrimination agencies
• Enacted legislation extending the statute of limitations for second- and third-degree rape and expanding the civil statute of limitations for claims related to these offenses, allowing victims greater opportunity to obtain justice.
• Increased school aid by more than $1 billion, bringing total school aid to a record $27.9 billion. In addition, Cuomo noted that new reporting requirements will address imbalances in the distribution of resources by prioritizing funding at the individual school level in order to advance a more transparent, equitable education system.
• Delivered criminal justice reform by, among other aspects, eliminating cash bail for misdemeanors and non-violent offenses, ensuring the right to a speedy trial, and transforming the discovery process.
“This was I believe, the most productive session in modern political history. You are going to have to go back and study the history books to come up with a session that did more good than this session did,” Cuomo added on Friday in an end-of-session media availability in the Red Room of the Capitol. “We laid out a 100-day agenda back in last December and said that this is a moment where we can make great change. You know change comes when the planets line up and the people are ready for change. Change is hard. The status quo is very difficult to overcome. It takes a lot of energy. It takes a lot of work. It takes a lot of advocacy. And it takes a lot of intelligence because it is not just, I want to change. Change to what? And what are the consequences of that change? It’s not just the political intent to make a change. It’s the legal effect of what that change is. It goes from politics to government. The political part is easy. I want to make change. Okay, the governmental part is hard. How do you do it and what are the consequences, et cetera? But we did it and the people were ready for change.”