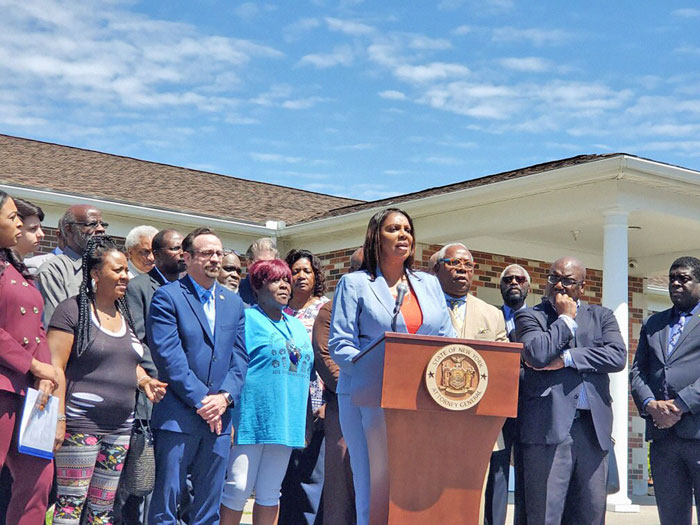 “Our bipartisan group of attorneys general is on the prowl for illegal robocalls, spoofing, and any other digital scheme aimed at scamming innocent Americans,” AG James said.

State Attorney General Tish James and a bipartisan coalition of attorneys general from all 50 states and the District of Columbia Monday, in a comment letter, urged the Federal Communications Commission to encourage telecommunication companies to implement call-blocking and call-authentication solutions to protect consumers from illegal robocalls and spoofing.

In Monday’s nine-page missive, the coalition state that telecommunication providers should:

“We must stop these bad actors from taking advantage of vulnerable Americans,” James said. “Our bipartisan group of attorneys general is on the prowl for illegal robocalls, spoofing, and any other digital scheme aimed at scamming innocent Americans. These outlaws may be able to run behind a spoofed number, but they won’t be able to hide when they have 51 attorneys general chasing them down.”

In June, the State Senate approved legislation that would limit robocalls to NY residents and requires telephone service providers to offer free call-mitigation technology to customers. According to bill co-sponsor, Sen. Joe Addabbo, Jr. (D-Howard Beach), the measure requires telephone service providers to supply consumers with technology that can identify and block unwanted calls. Although some providers do offer call-mitigation technology for free, others charge for the services, or haven’t made it widely available or easy to use, especially for Voice-over-Internet-Protocol landline phones. The proposed law would require this technology be made available, free of charge to any consumer who requests it.

According to YouMail, a company that tracks robocalls, unwanted robocalls have disproportionately targeted New Yorkers, who have logged 1.5 billion of them so far this year—290,300,000 in April alone. Weak oversight and the abundance of new technology have led to the sharp rise in robocalls, Addabbo posited. Landlines have very limited protections, which leads to a disproportionate impact on the elderly. Technologically, the arrival of Voice-over-Internet-Protocol dialing has allowed companies to discharge millions of calls for pennies; and spoofing, or fraudulently displaying a fake a telephone number on the recipient’s caller ID, makes consumers even more susceptible to unwanted calls and scams. This technology has undermined the effectiveness of the federal government’s Do Not Call Registry, which previously protected New Yorkers from intrusive telemarketers, Addabbo noted.