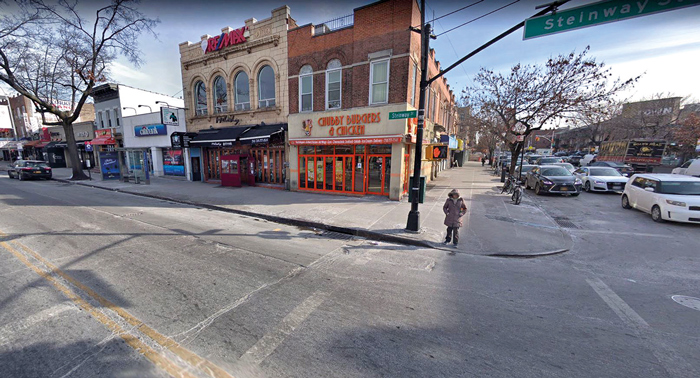 The incident occurred on Steinway Street near 28th Avenue.

A conviction for manslaughter and other crimes was handed down this week to a 27-year-old Brooklyn resident for shooting and killing a man following a dispute on Steinway Street in July of 2016. Santiago Salcedo, 27, of Madison Street in the Bedford- Stuyvesant has been sentenced to 25 years in prison.

The early morning dust up was sparked when someone slung insults at the women accompanying Salcedo, who retaliated by grabbing a gun to defend their honor.   “This act of violence could have easily been avoidedsaid DA Katz. “An early morning derogatory remark started a chain of events that resulted in one man being killed.”   In December 2019, following a 5-week-long trial, a jury found Salcedo guilty of manslaughter in the first-degree, attempted assault in the first degree and 2 counts of criminal possession of a weapon in the second degree. Queens Supreme Court Justice Ronald Hollie sentenced Salcedo to 20 years in prison on the manslaughter conviction and 5 years for attempted assault, to be served

consecutively. The defendant will also serve 5 years’ post release supervision.   Trial testimony reveals that shortly after 4 a.m. on July 17, 2016, after going to several bars on Steinway Street the defendant and 3 friends – two women and one man – walked near 28 th  Avenue in Astoria, Queens. The foursome walked by Qsaun Brown and another man. Moments later, Brown and his friend made derogatory remarks about the 2 women accompanying Salcedo. One of the women asked the defendant “Are you just going to let them disrespect us like that?”   Salcedo and his friend then went to a car and retrieved an item from the trunk. The 2 men then walked back and confronted Brown and the other man on the street. They argued and the 23-year-old victim ran to his car about a half block away and then drove back toward Salcedo. Brown, who did not have a weapon, jumped from his vehicle and rushed toward the area where Salcedo was standing. That’s when the defendant grabbed a gun from his friend and fired 5 times at Brown and the other unarmed man. The victim, who was also from Brooklyn, was struck once in the neck and died 2 days later at a nearby hospital. Brown’s friend was not hit by gunfire.