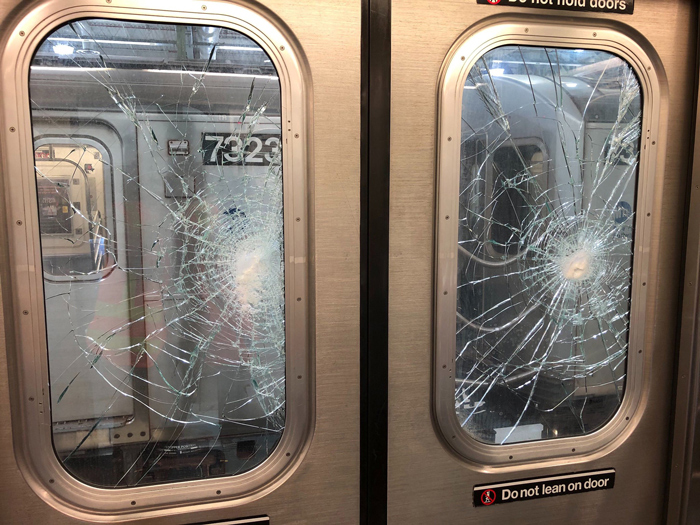 A vandalized 7-Line car at the MTA Corona Maintenance Facility.

A reward of up to $10,000 is being offered for information leading to arrest and indictment of a person or persons responsible for a recent wave of window vandalism on subway cars, the Metropolitan Transportation Authority announced Monday.

According to the agency, since April there have been more than 70 incidents of smashed windows across four subway lines, with the majority of incidents occurring on the 7, and the remainder on the 2, 3 and A lines. The repair and replacement cost for the windows has thus far been more than $300,000. Since Friday evening, 25 windows have been smashed on three 7-Line trains.

“This person has caused over $300,000 in damages, and has caused our customers on the 7 Line—working people in Woodside and Sunnyside and Corona and Jackson Heights and Elmhurst—delays. And there have been scores of incidents,” MTA Chairman and CEO Patrick Foye said. “I want to call upon our criminal justice partners in the City’s district attorney offices to prosecute this person and others who are damaging subway or bus property to the fullest extent of the law.”

According to the MTA, the announcement follows a high-level meeting with MTA and NYPD officials on Monday to discuss strategies to stop the vandalism. The reward is being paid for by the MTA and tips will be processed by NYPD Crime Stoppers. Anyone with information should call Crime Stoppers at (800) 577-TIPS (8477).

City Police officials also noted that Crime Stoppers is offering an additional $2,500, for a total reward of up to $12,500.

“It’s important that we have the public’s assistance,” NYPD Transit Bureau Chief Edward Delatorre said. “We know that our history in Transit is that most of our major crimes do get solved with the help of the public. We have a great ridership in Transit. And there has to have been some witnesses to this vandalism, over the course of the last couple of months. I’m calling on the public to pick up their phones, call Crime Stoppers and give us some help with this case; it’s important to everybody that we close this case soon and stop this vandalism.”

According to the MTA, the windows are made of a specialized ballistic safety glass designed to keep people safe by not shattering. The MTA keeps a stockpile of replacement glass, but that has been exhausted, causing a need for glass vendors to keep up with the wave of vandalism with new production in real-time, and threatening to require service adjustments due to trains being out of service should the vandalism continue. These challenges come at a time when the MTA can ill-afford additional costs due to the fiscal crisis brought on by the COVID-19 pandemic.

Agency officials also indicated that the MTA will pursue civil litigation to reclaim funds spent on window repair in the event that the responsible parties are identified.