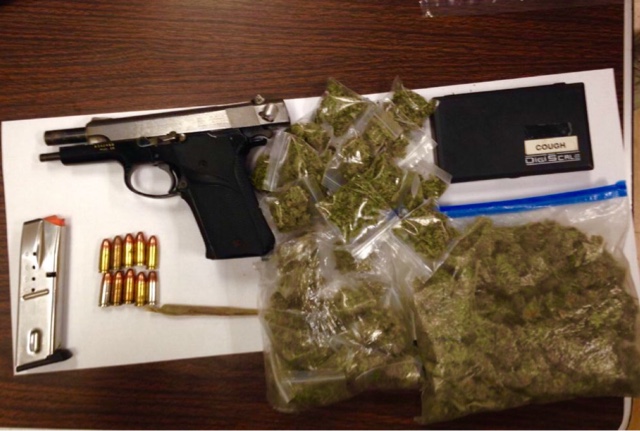 PHOTO:  Southeastern Queens cops last week reaped these rewards after stopping a man for relieving himself in public. Photo Courtesy of NYPD

Another quality of life stop has produced more than a simple court summons.

Anti-Crime Unit cops last week in Laurelton retrieved a handgun and approximately five ounces of marijuana after searching a man who they had observed urinating between two parked cars, according to police.

As of press time, Robbins remained on Rikers Island, unable to post $10,000 bail.

The officers, assigned to the 113th Precinct, were in the area searching for a vehicle whose driver fled the scene of a traffic stop earlier in the evening at 150th Street and Rockaway Boulevard. Prior to speeding off, an officer entered the vehicle’s license plate information into his newly issued NYPD smart phone. The officers were able to quickly determine that the registered owner of the 2010 black Mercedes E350 resided in Laurelton.

The officers then drove to the vicinity of the registered owner’s address to look for the vehicle when they happened upon Robbins relieving himself.

It was unclear if the driver from the traffic stop was apprehended as well.