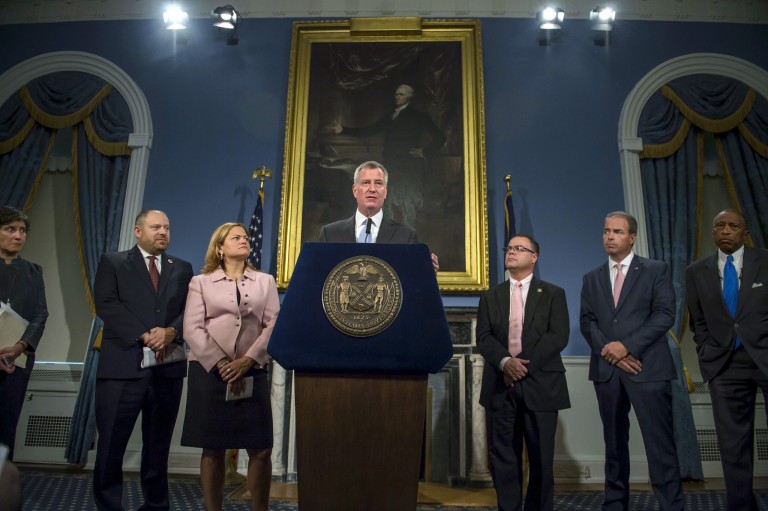 Mayor Bill de Blasio last Friday, three days after the murder of another city police officer, called for two changes to state law that would provide judges with more tools to ensure that certain defendants are not released to the street.

De Blasio, who was joined by City Council Speaker Melissa Mark-Viverito and Manhattan District Attorney Cy Vance, requested a change in state law to allow judges to consider public safety risk in determining an individual’s bail amount. Currently, New York is one of three states that do not allow judges to consider dangerousness when setting bail. He also called for public safety risk and flight risks to be considered when a judge determines whether a defendant is eligible for a diversion program, neither of which is currently required for consideration.

Tyrone Howard, the suspect who has been charged with gunning down NYPD Officer Randolph Holder, had an extensive history of drug felonies and misdemeanors. The judge could have made a different bail decision if he were able to consider Howard’s extensive criminal history as an element of dangerousness. Criminal history is a major component of validated risk assessment tools that have been shown in other jurisdictions to accurately predict whether a defendant will re-offend if released, de Blasio noted.

“The death of Officer Randolph Holder was a clear and tragic signal that we must ensure dangerous individuals with long criminal histories do not walk our streets. Yet as the law stands, judges can only consider risk of flight when determining a bail amount,” de Blasio said. “Our judges must be able to look at how dangerous someone is when they decide how much bail is set – and should look at these factors when they decide whether to divert someone away from jail. If someone poses a significant threat to our city’s safety, they must be behind bars – and today’s announcement is a strong step toward keeping our residents, and our hardworking officers, safe from harm.”

De Blasio is also calling for the addition of dangerousness and risk of flight to the state Judicial Diversion statute. Current law does not require judges to consider either of these factors.

While de Blasio’s calls for bail reform have been widely touted, not all stakeholders are on board.

“The current statute has been effectively used since its inception and already gives judges the power to protect public safety. In fact, recent studies all point to a steady decrease in felony arrests and just this past summer, Commissioner Bratton announced that the City was on its way to reduce felonies to an historic low. While the death of Police Officer Holder is a tragedy for the entire city, changing the law to undermine the presumption of innocence is not the answer and would have disastrous consequences for fairness in our criminal justice system.”